CVD is the leading cause of morbidity and mortality worldwide

Inherited cardiac diseases consist of a extensive and diverse range of diseases of the heart, including the cardiomyopathies and the arrhythmic diseases in structurally normal hearts, that is, channelopathies. There is estimated prevalence of 3% in the general population, these conditions suggest a significant epidemiological entity global and are a major cause of cardiac morbidity and mortality in the young.

Next-generation sequencing (NGS) is a high-throughput procedure that allows rapid sequencing of the base pairs in DNA or RNA samples. Allowing  a extensive range of applications, including gene expression sequencing ,human microbiome research,  detection of epigenetic changes, immune system and inflammation research ,  molecular analysis as Hereditary Cancer Screening and Hereditary Cardiac Diseases Screening among others, , NGS is encouraging innovation and empowering the potential of personalized medicine.

The knowledge of a hereditary cardiomyopathy condition can help from better scrutiny and instructive phases to better-quality manage their risks as well as determine the best treatment through genetic testing for medication effectiveness.

The return of any results from genetic testing for heart disease to a patient should be complemented by post-testing genetic counseling, so that the patient has a complete understanding of the associations of the results for their health and, possibly, the health of family members because any biological relative might share the same variant and either have the disease or be at risk for developing the condition in the future.

With the achievement of the Human Genome Project and the improvement of gene detection technology, the precision medicine has progressively been applied to clinical practice. 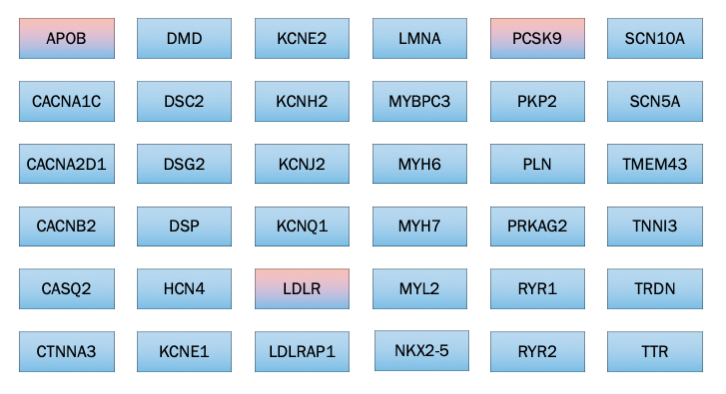 Familial hypercholesterolemia (FH) can be caused by inherited changes (mutations) in the LDLR, APOB, and PCSK9 genes, which affect how your body regulates and removes cholesterol from your blood. About 60-80% of people with FH have a mutation found in one of these three genes. Some mutations that cause FH remain unknown. (CDC)

What genetic variants are associated with FH?

At present-day,  most people with heterozygous FH have variants in one of three genes: LDLR gene, APOB gene, and PCSK9 gene.

The LDL-C level is not as high as 190 mg/dL, but family history suggests FH